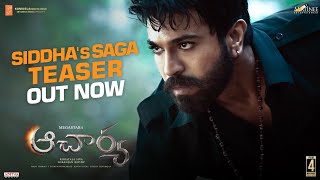 Ram Charan’s Character Teaser From The Most Awaited Film Acharya released now. Titled Siddha’s Saga, the teaser raised the Expectations on the Movie Once Again. The Teaser reveals hero Ram Charan as Siddha and small peek into Sidha’s life. The teaser shows Mega Power star #RamCharan in two different avatars, an Easy Going Soft Hearted Village man and a Rough and intense Naxalite. He Looks striking in both the looks.

Siddha’s Saga teaser also has a few glimpses of Ram Charan and his Love Pooja Hegde’s beautiful chemistry. And the Locations looks Brilliant. The dramatic events that transform Siddha into a Naxalite will be quite interesting to watch. Cinematography by Tirru needs a Special Mention. And the BGM by Mani sharma elevates the Mood. And the Teaser is Trending on Top in Youtube with Record Views.

And the last shot which Compares Both Chiru and Ram Charan to Cheetah and its Cub makes the most talked about topic and Raised Expectations already. Acharya also stars Star Heroine Kajal Aggarwal as the film’s leading Lady and Sonu Sood in a prominant role. The film is being produced by Ram Charan and Niranjan Reddy under Konidela Production Comapny and Matinee Entertainmnets. Manisharma has composed the music for the film, Acharya is slated to on February 4, 2022.